Indy for the Outie: Open Thread

Apparently, I am not the only one who could not attend this year’s SBC Annual Meeting, so I thought I might try the open thread thing again like last year. The purpose of this post is simply to open up the discussion to talk about anything related to the annual meeting (a recent article by Sam Hodges of Dallas Morning News has been referenced a time or two already). To view the events of the SBC Meeting, click here. Some of the topics may include:

* SBC Presidential race (who and why)
* Regenerate Church Membership (and other resolutions)
* Will the 101st resolution on alcohol get passed?
* Will the Garner Motion (re: BF&M) get raised again?
* Will the IMB policies and push for reversal get a hearing?
* Will will be said regarding Calvinism? Emerging church movement?
* Will the Cooperative Program be as dominant an issue as years before?
* How many people attending this year will not have gray hair?
* How many times will the shofar be blown in the next two days?
* How many non-white people also will be in attendance?
* Any thoughts on the SBC “Hall of Fame Faith”?
* Will the issue of the environment and global warming “heat up” again?
* What about the camel method and missions strategies?
* Will Wiley Drake’s nominating speech be as entertaining as last year?
* Will there be more or less messengers this year? What does this say?
* With the SBC in decline, how will Southern Baptists respond?
* Will there be any surprises or unsuspecting controversies to erupt this year?
* Or could it be that people are growing more ambivalent and jaded in the process?
* Could there be a renewal and consensus, working toward a “Great Commission Resurgence?”

Well, that’s some off the top of my head for starters. 🙂 If there is anything that crosses your minded somewhat related, feel free to bring it up (especially if you have been uniquely qualified by one of these pictures): 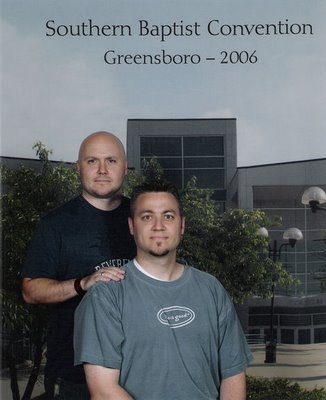 Or if you have mastered the technique to reaching out to the young leaders of the SBC like my favorite minister of mischief, King Kummer has in this video:

Or if love has compelled you to twitter all the happenings as Ed Stetzer has (hilarious pics BTW).

But seriously, there are some things I find particularly important, as you know. Tuesday morning at the Founders Breakfast Eric Redmond will be talking about “The Reformation That Must Come.” Speaking of Eric, I think that, were he to run this year for Prez, he would win hands down (hint). I am also hoping that Dr. Dockery’s recent release on Southern Baptist Consensus and Renewal will win the day when it comes to the infighting and narrowing of cooperation. For those who might want to check in at times where issues are most like to be raised, you might want to mark these following times:

Other reports worth checking into are the IMB and NAMB reports, each of the six seminaries, and the Executive Committee (two parts). You can view the entire schedule by going here. Lastly, I will say that I have appreciated the leadership of Dr. Frank Page over the past two years. He is a true statesman for the SBC, and while I have disagreed with him on some issues (not the least of which is Calvinism), I appreciate his commitment to being a gracious man with an irenic spirit (see also Ben Cole’s tribute). I hope that whoever fills his shoes, regardless of his theological or political convictions, they will carry on with this same spirit and demeanor.

So there you go. The thread is open to talk about whatever else related to the SBC. In the meantime, I, too, will twit a little myself. 🙂