Offline this week, I am writing a paper examining how Jonathan Edwards and Charles Finney each understood conversion and revival. Finney’s legacy is widely known for his “new methods,” many which where welcomed into Southern Baptist life in the twentieth century. Some of the remnants of decisional regeneration can be found in prominent Southern Baptist evangelist who tell their audiences, “If you are 99% saved, you are 100% lost!” or “I’d rather be saved twice than lost once!” Other times Revelation 3:20 is employed to state that God is knocking on the door of the sinners heart. The preacher then says that the door has only one handle, and it is on your side. If you are going to be saved, it is up to you to open the door yourself and “accept Jesus into your heart.” God can only beg and plead for you to respond to his appeals, having only made salvation possible but not effectual. It is like this illustration that was used in Moody’s day: 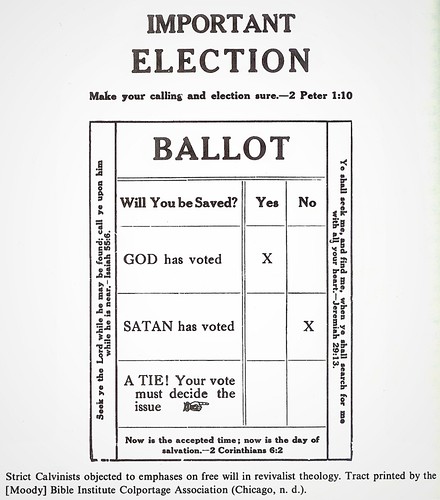 Decisional regeneration has had free reign for decades, and anyone who would challenge the techniques or methods that produced decisions, whether it was walking down an aisle, raising a hand, or praying a prayer, would be considered to be doing the work of the devil (what I call the “Momma Boucher” complex for all you Adam Sandler fans). Indeed, decisional regeneration has become a control belief and justifying motif for various practices that accompany the man-centered, attractional philosophy of ministry. But just how far has it gone? Could it be so controlling that it is leading Southern Baptists to misunderstand and even re-write Scripture? Surely not.

Last month, I received a copy of Sunday School curriculum developed by First Baptist Church Jacksonville, Florida entitled “Lifestyle Evangelism Made Easy.” Chapter two is entitled “The Simplicity and Variety of Witnessing” where three figures are examined: Andrew (John 1:35-42), Lydia (Acts 16:11-15), and Ananias (Acts 9:10-22). The lesson aim is “to lead our students to develop a personalized witness or invitation.” Now check this out.

Did you catch that? The SS teaching says,

“It is interesting that she ‘opened her heart‘ (NASB) to the Gospel and that it made a difference in her life.”

“A woman named Lydia, from the city of Thyatira, a seller of purple fabrics, a worshiper of God, was listening; and the Lord opened her heart to respond to the things spoken by Paul.”

This Sunday School curriculum is not just merely a bad interpretation of Scripture; it is a complete re-write of Scripture! When this massive error was made known to church leaders, their first response was that it was “lost in translation.” Later they shirked it off as a “typographical error.” No formal correction was made.

When I was in elementary school, I was taught basic English grammar like sentence structuring and what is a subject, verb, and object. Not wanting to insult your intelligence, for the sake of this illustration, let’s be clear that the subject does the action and the object receives the action. So when I say, “The boy hit the ball,” we all can agree that the subject (or the one performing the action) is the boy, and the object (receiving the action) is the ball. English 101. Theology aside, basic English grammar tells us that when a sentence says “the Lord opened her heart” that God is performing the action, and Lydia’s (her) heart is receiving the action.

Now that we have covered, let’s go to Theology 101. The Bible says that “if any man is in Christ, he is a new creation” (2 Cor. 5:17). We hear that quoted often in evangelistic messages. But how often do you hear the first five words of the next verse? 2 Cor. 5:18 begins,

What is “all this?” It is being a new creation in Christ.

Again, take John 1:12 which says that “to all who did receive him, who believed in his name, he gave the right to become children of God.” This, too, is often used (“believe and receive”). But what about the next verse? John 1:13 says,

“who were born, not of blood nor the will of the flesh nor of the will of man, but of God.”

There it is again. If we are born again, it is not of us or our doing. It is entirely “of God.” This is why Paul can say things like “He [God] is the source of your life in Christ Jesus” so that in his divine choosing of us, not a single person can boast that they had anything to do with it (cf. 1 Cor. 1:26-31). But what about Peter? Does he say the same thing? At the beginning of his first letter, Peter writes,

“Blessed be the God and Father of our Lord Jesus Christ! According to his great mercy, he has caused us to be born again to a living hope through the resurrection of Jesus Christ from the dead” (1 Pet. 1:3).

This lies at the very heart of the gospel. When the Bible says that “God opened her heart,” it is saying that God did the miracle of regeneration in the heart of Lydia by sovereign mercy and free grace. To say that Lydia opened her own heart is to strike down the gospel at the very heart of its meaning. Friends, this is no little matter. The good news of Jesus Christ is that God has purchased for Himself a people for His own possession through the shed blood of His own Son. God did not make salvation a mere possibility and then left the final act up to us! God the Father who planned salvation before the foundation of the world and God the Son who fully and perfectly accomplished salvation on the cross has sent the Spirit to effectually draw us to Himself while applying the work of redemption and supplying the evangelical graces of repentance and faith.

That is why the author of the famous hymn, Amazing Grace, said,

“If I had a proper call, I would undertake to prove, that to exhort and deal plainly with sinners, to stir them up to flee from the wrath to come, and to lay hold of eternal life, is an attempt not reconcilable to sober reason upon any other grounds than those doctrines which we are called Calvinists for holding; and that all the absurdities which are charged upon us, as consequences of what we teach, are indeed truly chargeable upon those who differ from us in these points. . . . As to myself, if I were not a Calvinist, I think I should have no more hope of success in preaching to men, than to horses or cows.”

John Newton knew that grace was not amazing if it was not efficacious. He knew that “a proper call” (general call) would be “an attempt not reconcilable to sober reason upon any grounds” than what Calvinists hold (namely the doctrines of grace). He knew that the best preaching in the world would be exercises in futility to bring about salvation if God did not open up people’s hearts. So whenever you sing that song Amazing Grace, remember that if it wasn’t efficacious, we would be singing the same song of horses and cows.

So how did we get to this? How is it that Sunday School curriculum is being passed out to Southern Baptist churches that get the gospel wrong and even re-write Scripture in the process? How did we get to the point that decisional regeneration and man-centered theology become so dominant that it clouds our ability to see what the Scripture says, let alone interpret it correctly? How can we think we have the luxury to say what we want the Bible to say more than what it actually says? Such eisegesis is an indictment for those who fought to recover the truthfulness and authority of Scripture.

Some of you will probably consider this an overreaction. Perhaps so. But I love the gospel. I love to sing Amazing Grace. I love to see the miracle of conversion where God opens up sinners hearts to new life, conviction of sin, and repentance and faith in Jesus Christ. And that is why this grieves me so, why those evangelists imbibing in the methods of Finney and selling decisional regeneration are so hurtful to the cause of the gospel. This legacy in the SBC is one, in my opinion, that needs to be forgotten.

It also shouldn’t be taught in Sunday School either.